Larry Mindel is a rare find, with classic songwriting that also feels fresh and modern. Intricate musical arrangement meets excellent production – and to top it all off – there are lyrics that sound like something from a poetry book…

The New Single Is Out Now

The artist’s latest single is the candid ‘Whisper The World Away’, which follows on from the December release of debut album ‘Love in Troubled Times’. Mindel’s music is to be treasured; savoured. This isn’t throwaway stuff made for Spotify – it’s music to pause with.

You are sure to enjoy the soothing guitar melodies of this latest single, accompanied by rich string textures. The video is absolutely fitting too. We see Mindel bathed in amber light as though by campfire with his guitar, juxtaposed with crisp scenes in nature. Mindel’s music and visual encapsulates something truly heartfelt, and it is this authenticity which shines through and touches the souls of those who watch and listen.

Starting at 15 in West End coffee clubs, Mindel then formed a free music collective in Leeds in his early 20s, before moving to the south coast, where he was drawn to the strong folk music tradition of Hampshire and West Sussex. Though Mindel’s life drifted away from music, he was pulled back to it in 2004 after producing a simple CD for friends containing his first new songs in over 20 years. Buoyed by their support, he started sharing them more widely and eventually produced the band album of 2016 – Night Flight.

Since then Mindel has been performing regularly from England to Europe to Australia and New Zealand. The artist’s intimate style – with his careful, understated guitar playing – sees him connect with his audience one to one, where you can hear every heart beat in the room. If you’re in the UK keep your eyes peeled for a Larry Mindel gig!

We’ll leave you with the beautiful lyrics from the new single ‘Whisper The World Away’, out today:

In the last hour before the daylight

Where the ages weep for the morrow’s dew – 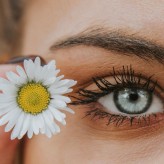