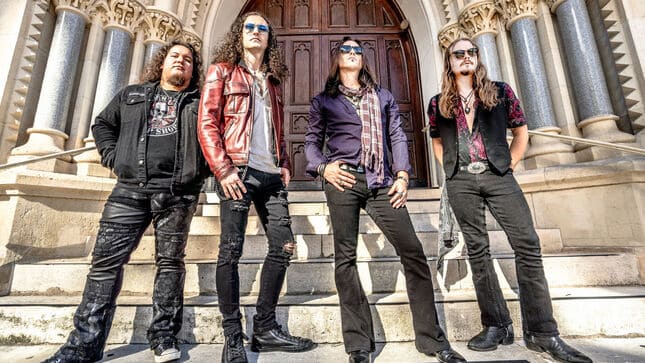 “Reach The End,” Which Is The First In A New Collection Of Songs, Kicks Off A Season Of Shows For The Texas Rockers Including Dates With Saliva & Mainstage At The Sturgis Motorcycle Rally

Austin hard rockers Black Heart Saints have announced that their new hit single “Reach The End” has debuted as the #1 Most Added On The Billboard (BDS) Mainstream Rock Indicator Chart as well as the Foundations SMR chart. Released on all DSPs July 16, the single was unveiled with a riveting video at https://www.youtube.com/watch?v=RGNyv_m1Hnsand iskicking off their summer tour dates with Saliva, The Sturgis Motorcycle Rally and more.

Described by the band as a “groove-infested tune with a heavier, modern feel,” “Reach The End” is the band’s first new music since the successful release of theirEP Miseryin 2019. Not only did it land the band in the Billboard Mainstream Rock charts twice but its commercial success also paved the way for appearances at SXSW, Sturgis Motorcycle Rally, and serving as the support act for such national artists as Slash featuring Myles Kennedy & The Conspirators, Sevendust, Steel Panther, Pop Evil, Buckcherry, Dirty Honey, and more.

To capture “Reach The End”’s more progressive sound, Black Heart Saints turned, once again, to Producer Omar Vallejo at 512 Studios in Austin, TX, who worked with the band on their last album Misery (2019), for the single. Calling Vallejo the “real deal,” Sean says “he brings out the best of us every single time.”

This year, Black Heart Saints will hit the road performing shows and festivals across the U.S. and have plans to release additional singles and videos as a part of new collection of music.

With a distinct groove steeped in classic rock and a modern intensity, Black Heart Saints exploded onto the scene with a bravado that is clearly backed by talent. Their recent studio singles “Lines”and “Misery” from their latest EP Misery (2019) topped the Billboard Mainstream Rock Radio Charts in 2019, at #19 and #24, respectively, paving the way for appearances at SXSW, Sturgis Motorcycle Rally, and serving as the support act for such national artists as Slash featuring Myles Kennedy & The Conspirators, Sevendust, Steel Panther, Pop Evil, Buckcherry, Dirty Honey, and more.

And although 2020 proved to be a particularly challenging year for the entire entertainment industry due to the global pandemic and subsequent shutdowns, Black Heart Saints quickly adapted to the unprecedented conditions by launching a Netflix-style subscription-based video service for fans called BHS TV. The band also partnered with Harley-Davidson and Loop.tv for exclusive streaming performances that captured audiences from all around the world.

However, while the band first garnered commercial success in 2019, they were attracting massive attention long before that. Their first full-length release ALIVE (2017), drew acclaim from fans and critics alike and led to the now famous “Road To Sturgis Tour.”Putting Black Heart Saints’ charismatic live performance to the test, the band took the stage at the world-renowned motorcycle rally, attended by over 500,000 bikers from all around the globe, and the group earned the respect and devotion of a whole new audience base.

This experience catapulted Black Heart Saints to the West Coast where they completed an extensive tour, including a headline performance at the Viper Room in West Hollywood, CA.

On April 12, 2018, Austin City Council and Mayor Steve Adler officially proclaimed April 12th to be “Black Heart Saints Day.” The following year, the band was awarded #1 Best Rock/Metal Act at the prestigious Austin Music Awards, being recognized alongside other local luminaries such as Willie Nelson and Black Pumas.

After being tapped to open for Steel Panther, Slash, Pop Evil, and Dirty Honey throughout 2018 and 2019, Black Heart Saints have been rocking the stages in their native Texas, with highlight performances at prestigious venues such as the House of Blues in Houston, Texas.

Rapidly ascending to perform some of the biggest stages and festivals in the United States, Black Heart Saints have built an impressive resume, and have been recognized as one of the nation’s top emerging rock acts. Highlights to-date include: