From sneaking on stage as a child to sing with her mother in the church choir to multiple live performances including her own sold out headline show; OURAA has put a lot of time and effort into her craft and it definitely shows with all of her releases having several thousand plays each.

For those new to your work, how would you describe it to them?

“I’d describe myself as a Pick & mix artist in that I very much record and release what I’m feeling at that time. My first single was the Afropop, the next one had a more tropical, soca feel then I made and rnb single and I’ve even done a house remix! I have a very soulful voice but I love jazz and pop. At the moment I’m still finding my sound but it’s hard because I want to do everything. I consider myself a jack of all trades.” From what we’ve heard we’re inclined to agree.

Who/what inspired you to make music and who/what continues to inspire you currently?

“I come from a family of musicians but my main inspiration is my Mum and her church. My Mum is a singer in the church choir and every Sunday they have a dress code. I used to find out what colour they were gonna be wearing so I could match my outfit to theirs and sneak on the stage to sing with my mum and the choir. I haven’t always been good at singing, I’ve done a lot of vocal training to get to where I am now. As well as my mums church, I grew up in a New Testament church so you can hear and feel the Caribbean/Gospel influence in most of her songs”

We touched on her single ‘What Do You Want’ which despite being an older release is  a lot of OURAA’s fans favourite. It has a soca feel to it and you can’t help but move when you hear it, in a year without NHC carnival we have missed music like this.

Favourite part of your creative process?

“I’m very good at hooks and melodies, I tend to know how the song sounds but not necessarily have the production. A lot of the time I think of something before bed and record it on my phone straight away but then fill in the words over time”

If you could have been in the studio to see any project, dead or alive, recorded, which would it be and why?

“Michael Jackson. I’ve heard stories about how he would sing each instrument part – he’d sing it first then get the producer to play it back to him. I feel like that’s a beautiful way to do things it’s an amazing way of working.” She expanded on this, adding “Not everyone will know chords and triads, if the producer is open minded a lot of beautiful melodies, things, can be created and don’t get lost in translation.”

Most recent song you reloaded on Spotify?

“Emily King – Remind Me. It has new school/funk elements to it and it has a modern, relatable feel.”

What should we expect to see from you in the near future?

“I’ll be releasing my new single Orange Juice on the 7th of May. My favourite colour is orange and National Orange Juice Day is on the 4th May. I plan to consistently release new music this year and already have a few songs in the pipeline.”

Now’s your chance to shout them out, who would you most like to collaborate with?

“If you’d have asked me a month ago I would have found it hard to think of someone but I’ve recently been building a friendship with Kojey Radical, I feel it would be nice to do something with him and that it just makes sense. He has great energy and I’ve always liked his sound. Although we have different sounds, I love clashing against the norm and not following the rules.”

Where do you want music to take you?

“I want my music to reach people that can relate, my music is very encouraging. I feel like I’m an artist that isn’t like everyone else in terms of looking a certain way. You don’t have to look a certain way to fit in society. People are fighting little battles and need that reassurance and encouragement. When we look out we only see a certain look, I want people to know that you can be a size 18 like me, wear glasses and be a singer.”

What do you see yourself doing in 5 years?

“I want to be signed to a label. I know who I am as a brand so it’d be easier for them; they wouldn’t need to change much as I know what I stand for but they would help get me out there. I feel like I need that push to reach better numbers/ a bigger audience. It would also help with releases and getting my music sent to the right people and playlists.”

Check out OURAA’s new single Orange Juice on Spotify below: 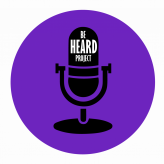 Be Heard Project is a community led social enterprise. The team is made up of industry leading professionals within Music, Radio and Podcasting.We work with young people in the community that identify with any minority group; Black, Asian, South American, LGBQTIA+, Physical or Learning Disabilities - or any other minority group.Applicants can access our services for free or at discounted rates, which include:- Professional Mentorship from someone in the industry- Professional Recording Space- Feature articles in digital publications