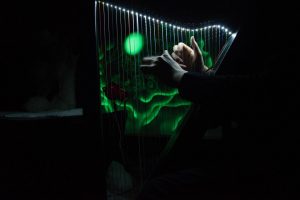 The new album ‘Lunarium’ was released in December 2019 with the support of Neostatics Sounds. ‘Lunarium’ includes six tracks created in the period 2015-2019. You can find original instrumental music (Celtic harp, pan flute, guitar) in compilation with an electronic sound in this new album. ‘Lunarium’ is a blend of ethnic and futuristic vibes.

“Every track in the Lunarium has its own energy and history. Images of nature… Dreams about fantastic journeys to stars…”

Through The Fall has dropped another single, it’s a heart wrenching song about a close…

New indie rnb/neosoul/jazz singer criibaby only had one 2020 resolution: redefine inclusive music. With this…

Blaise is back with his latest offering ‘Get Up’, a contagious rework of the Byron…

Eth. Authenticity are a new and spectacular world music electronica project from the Czech Republic.…