Is ‘infectious, bouncy pop-party-rock’ a genre? If not, it needs to be, and the debut single from Alaskan-based (and how often do you get to say that?) funky alt-pop artist Ristlynn should be right at its forefront.

There’s a very on-trend faux-1980’s vibe to the groove-soaked overdriven bass riff, pushing and pumping in a mix of dance and rock before the big fuzzed-up guitar powerchords kick in on the chorus, reverb-drenched keyboard lines filling in the gaps in between. Raunchy, raucous, and rocking in the same sort of alternative way as Bare Naked Ladies, Maroon 5, Panic! At The Disco, or Fall Out Boy, more than anything there’s a (male-voiced) Pink! feel to it, too, in the way it melds funky dance and out-and-out punk rock into a completely coherent, contemporary sound.

Musically, ‘I’m Going Down’ might be an energising party-in-a-packet, but it’s lyrically that Ristlynn really cuts through the alt-rock chaff; whilst many bands can write a rowdy helter-skelter blowout of a track with gonzo lyrics about drink, drugs, and girls’n’boys, it’s the subversiveness of Ristlynn’s lyrics that truly set ‘I’m Going Down’ apart from the norm. Written with an existential overview of the hedonistic pursuit of pleasure and transient, feel-good moments, rather than worshipping at the overdone altar of decadence Ristlynn’s vocal casts a knowingly critical eye across the self-destructive ‘party at all costs’ rock’n’roll vibe.

Although ‘I’m Going Down’ was released at the very end of 2020, it really couldn’t be more apposite; if ever there was a time to address behaviour and, basically, shout “get a grip” at the mask-avoiding, 5G-conspiracy, ‘if the pub’s shut at 10 we’ll party in the street instead’ set, it’s the dawn of 2021: Brexit, Coronavirus, and the death-throes of Trumpism make ‘I’m Going Down’ germane and bang up to date. Dick Rowe famously failed to sign the Beatles to Decca on the basis that ‘Guitar groups are on their way out’. That was 1962; on the basis of ‘I’m Going Down’, Ristlynn proves that, almost 60 years later, he’s still as wrong as ever. 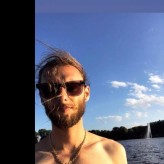