As the NBA’s Sacramento Kings gear up for their pre-season tour of India, owner Vivek Ranadivé pondered the effects such a long flight may have on his team. In such a bind, there wasn’t much else to do but call on hip-hop superstar Drake for some assistance.

Heeding the call, the Toronto native and all-round nice guy has proffered his $220m private Boeing 767 for the cause.

As a result, players and a few select coaches will get to travel in ultimate style and comfort aboard Air Drake for the estimated 22-hour flight to India.

“Out of consideration for the comfort of the players given the travel time required to make this historic trip to India, the Kings finalised an additional aircraft for the players and several members of the coaching staff,” the team told NBC Sports California on September 27.

Now, rather than dreading a long-haul flight, the players are ready and willing to get on board.

“Drake is someone that I’ve met, that I know,” Kings point guard, De’Aaron Fox said.

Fox also made sure to give thanks to Kings owner Ranadivé for his foresight in calling on Drake: “It’s great. I want to say thank you to Vivek for pushing us to do this.” 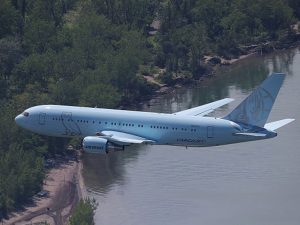 The NBA pre-season tour of India will see the Kings take on the Indiana Pacers in two games on October 4 and 5. This will be the first time NBA has been played in the country and is bound to bring in a host of new fans to the sport.

The Kings will depart from Sacramento this evening for the first leg of their trip. A brief fuel stop in London will follow before the final ten hour stretch to India.

After graduating in Marketing and Media from Waseda University in Tokyo, Nicole made a temporary move to Toronto where she worked as a freelancer reporting in Japanese for Drake’s fashion label, OVO. After a brief stint back home in Australia, she moved to the UK in late 2018 where she has worked as a freelance translator and interpreter, before joining the Music Crowns team as a staff writer.

For the uninitiated, Jeff Kaale rose to prominence with his self-defined “Jazzhop” style which got…

The energetic and eccentric style of Haytor is back with this unusual single. Drawing influences…

The talented New Yorker, Brandon Lee Richardson is turning heads with his musical project. He…

In an age where so much music is being made and processed digitally, there’s something…