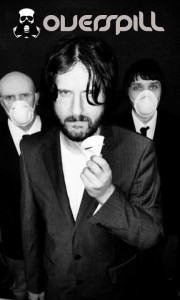 Overspill to release ‘In The Face Of Adversity’ on 18th November

The Liverpool born punk-rock band, Overspill have previously played to audiences at prestigious venues at the Liverpool O2, the MTC club in Germany which has also played host to other great bands like, Green Day.

While fulfilling their constant enjoyment for touring with their music, Overspill have produced head-banging tracks including, ‘Heavy Smoker’ and ‘My Peeling Skin.’ Having built up a large following online, the band have been playlisted on several internet radio stations and have been credited on their work by giants of the music industry like Bobby Kimball of Toto and legendary producer Ronnie King (Offspring, TuPac).

The trio is almost constantly touring, not just in the U.K.but also internationally and has recently completed another tour of the West coast of America. Be sure to catch them on one of their next dates as ‘hitting the road’ is their key tool to connecting with their worldwide fan base.   Check out their website for further tour information.

Overspill’s new E.P., ‘In The Face Of Adversity’ is set for release on 18th November. Featuring the tracks, ‘Cease Fire,’ ‘First Time On My Own,’ ‘Heavy Smoker’ and ‘My Peeling Skin.’

Michael of Angels is a hip hop artist from Ephrata, Washington, USA. His music combines…