How music can affect our performance | Tips - Music Crowns
0

Why does music remain so prevalent in modern-day existence? In any profession where intense focus is required, music is often used as a motivator or focus aid. Students are often found listening to music when they have intense study sessions, and painters listen to music while performing their meticulous brush strokes for hours on end. What is it about music that helps us perform, and what are some more scenarios in which music can make all the difference?

The connection between music and our mental state is well known today. Among various industries in the world, people use music to get pumped up for a big game, or perhaps to get in the right mindset for focus demanding activities. When the acoustics are perfect, music can be an intense motivator that helps you overcome challenges. Finding appropriate “soundtracks” when doing activities that require some intellectual effort can improve the mood, reduce stress, and enable clear thinking. For instance, card players are known to listen to music to drown out opposing players and help with the inevitable tedium of some tournaments. 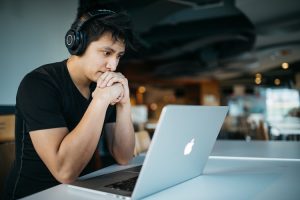 Surgeons Listen to Music During Operations

The world of surgery is a literal life and death affair and any mishaps or mistakes can cause permanent health issues, potentially leaving a hospital liable for millions. With this in mind you can imagine that surgeons do not take any chances or mess around when they are in the operating room. This becomes particularly interesting when you understand that surgeons are well known for listening to music while they are performing high stress operations. Many attribute music to creating the relaxed state they need to be in while performing these important procedures.

Studies in controlled environments have shown that when listening to music, surgeons have improved technique and work better under stress. Their cutting and stitching techniques become cleaner and faster, and errors are reduced overall. This leads to improvements in many ways for the hospital, including less time needed in the operating room and thousands saved on surgery costs.

Athletes use Music to Prepare for the Big Game

Anyone that follows sports knows that their favorite athlete is listening to music before and during games. Basketball players are constantly seen entering the arena with their headphones on, getting into the right mindset before they have to go out and play. Music is one of the biggest factors when it comes to getting their adrenaline pumping and ready for the game ahead; it helps them drown out any personal problems that are clouding their mind, and instead become more focused on performing well.

Researchers suggest that the bottom line is that music is a performance enhancing drug. Music releases a surge of endorphins that help you blast through your workout, or reach a performance level that you didn’t know you had. Music controls energy which is precisely why it is used in the next scenario.

This example really highlights the effects music can have on our mental state. Fighters have to cultivate a persona of fear and intimidation to antagonize their opponent and weaken their defenses. Walkout music can be used to get a fighter pumped up, but can also be used to project a fearful energy that unnerves their opponent. One of the best known examples of fighters that understand this dynamic is the incredibly beloved, respected, and feared Mike Tyson.

Tyson had perfected the walkout song intimidation technique years before this incident, but this was something completely beyond anything seen before in boxing. Tyson had previously been suspended for two years for the infamous Holyfield incident and so the 1999 fight versus Francois Botha was his comeback fight. Coming off two straight losses, there was a lot of talk around whether Tyson would be the same fighter. All of the doubt and rumors were put to rest as Tyson’s walk out music began. A hush fell over the crowd and everyone, including Botha, watched in silence and fear as Tyson marched to the ring to the sound of ominous bells and booming rap music. The music had scared the crowd, and his opponent, all while amping up Mike Tyson in a legendary moment in boxing that showcases how music can be used as not only a powerful motivator, but also an energy changing force.

When the football players of Cadillac High School in Michigan had fallen on hard times, the coach knew something needed to be done to turn these athletes around. The team was on a losing streak and something big needed to happen to get these kids to start winning games. That’s when he decided he needed to pump up the team with some pregame rock and roll. The band KISS was one of the biggest bands in the world in 1974, and so this coach played their biggest hits in the locker room before every game. What happened next will live on in rock and roll history.

Not only did the team turn around their misfortune, they became one of the best teams in the state. The school was so overjoyed that they wrote to the band to come and visit them, and in October 1974 that’s exactly what happened. The entire team had their face painted to match the band and the day was filled with photos and events before a final KISS concert in the school’s gymnasium. It was truly a day no one in that city would ever forget and provides a great example of music being used as a motivational force.