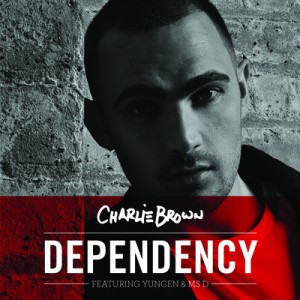 There are few that give real credence to the cliché ‘Good things come to those who wait’. For singer and songwriter Charlie Brown, it’s almost become his life motto, his raison d’tre. And while he’s had some incredible highs and some devastating lows, the wait, to coin another cliché, really has been worth it.

Gearing up this December to release his new single ‘Dependency’, Charlie is both a singer and songwriter who, over the last decade has grafted and really learnt his craft. Throughout his inimitable journey in music, he has been fortunate to write with the likes of Wiley, Jay Sean and The Script as well as work with high-profile hitmakers including Fraser T. Smith (Adele, Ellie Goulding), RedOne (Lady Gaga, Nicki Minaj, Usher) and FutureCut (Lily Allen, Wretch 32, Rizzle Kicks).

‘Dependency’, is creating a massive buzz amongst critics and music lovers alike are tipping Charlie Brown as the ‘Breakout Star’ for 2013. The track features street star Yungen and vocalist Ms D – known for her part on Wiley’s recent No.1, Heatwave. ‘Dependency’ was produced by Mushtaq and co-written with David Sneddon (Lana Del Rey, Hurts) with a mix by the mighty Sticky.

Charlie Brown’s new single effortlessly treads the taut line between commercial appeal and underground credibility. ‘Dependency’ is a mixture of classic songwriting brought together by a modern-day twist. His incredible pop vocals coupled with his serious soul edge demonstrate exactly why AATW were keen to snap him up.

Having signed to the label in July 2012, recent months have been spent in the studio recording his debut album with an array of established producers and writers. Collaborators include Quiz & Larossi (Conor Maynard, Cover Drive), MoJam (Emeli Sandé, Professor Green), Wayne Rodrigues (Natasha Bedingfield, Nelly Furtado, Kelly Clarkson) and newcomers Focus (Dappy, Misha B).
Body ‘Dependency’ and Charlie’s album ‘Dreamstate’ show exactly why he has previously been brought on board to write for some of the hottest names in music.

A captivating, charismatic writer and performer, this self-taught singer and songwriter is an incredible vocalist with serious and raw soul. Combining the melody-driven hooks of artists like the aforementioned The Script with the attitude and energy of Plan B, Charlie Brown is one of 2013’s most exciting prospects.

0
November 2, 2012
Uncategorized
No Comments Yet