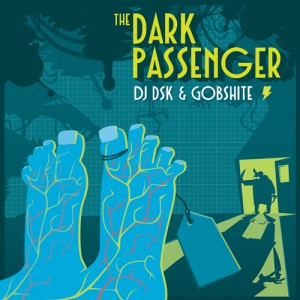 The debut release from DJ DSK & Gobshite “The Dark passenger” is creating a buzz already on the world wide underground hiphop scene and the DJs that have received the promotional copy. What makes the release even more interesting is that DJ DSK lives and produces music in Kunming, China. Gobshite wrote and recorded all the vocals in Phnom Penh, Cambodia. The duo met at an event in Cambodia on the Soul Clap Asia tour in 2011. Originally from the U.K. they have been performing and influential in developing the local hip‐hop scenes in their new found homes in Asia.

Aside from the romantic story of how this album was made though, as separate artists, Gobshite and DJ DSK are credible on their own. DJ DSK has been producing and djing for 25 years now and has a long string of mix CDs, vinyl, productions and events to his name. Most recently he has produced music and videos with Mystro and Akil from Jurassic 5. Gobshite who started rhyming in the early 2000′s in Leicester had a selection of projects under his belt before packing his bags and leaving in 2009 to explore and create music with the local heads in East Asia. His work with MGC (Molesta Gritty Committee) is most recognizable with himself and friends like Disebeats and Taskoner who claimed their aim was “to bring back the boom bap to this pop‐hop diluted excuse for a culture.”

The album varies in style and lyrical content but still remains a very British release with deep meanings and a lot of tongue in cheek humor. The tracks’ style vary from “No More Freebies” boom bap funk sound to a heavily Dub influenced “Pigeon Holes”. “CommuNOcation” is a song about the ridiculous use of social media in our lives with hardhitting electro beats and sounds. “In The Summer” is a stand out head nod track that features Facavie rapping in French along with Gobshite to describe another day in the summer. The title track “The Dark Passenger” describes what can only be described as a Dexter style Black Eyed Peas and Akon massacre. Early album reviews have compared the release to such heavy weights as Skitz.

DJ DSK & Gobshite will be touring around Asia in 2013 to promote the album; DSK will also be dropping an E.P. featuring Mystro and Akil from Jurassic 5 and a set of Nu-Funk breaks for party djs. DJ DSK also tours extensively throughout Asia’s top club circuit and is a high demanded DJ for hiphop dance events such as B.O.T.Y., Freestyle Session,and UKBoyChamps.