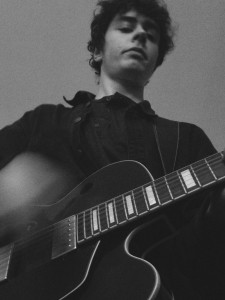 Ideal for lovers of affecting indie rock music, the new album from Barcelona based song writer Weinf is called ‘Requiem for Myself’. It is, in a sense, a concept album, with each song dealing with how it feels to be diagnosed with cancer. Put simply, it was all written in a short space of time after the writer himself was diagnosed, and as a result offers a detailed look into how that feels.

It makes for an intriguing, if at times hard, listen. His vocal and lyrical style comes across as a stream of consciousness, with long lines, thoughts and feelings unfolding gradually. He’s been compared with the likes of Jim Morrison and Bob Dylan, and he certainly shares some of their poetic structurings.

Musically, it’s built on a foundation of indie rock. Weinf is clearly a skilled guitarist, as evidenced by his sleek guitar riffs. The production also feeds into the raw feeling of the release as a whole.

Overall, this is a well-written, poignant snapshot of a very difficult time in a person’s life. Thankfully, Weinf has now been told his treatments have been a success, but knowing that doesn’t make this any less affecting. You can find the album here.